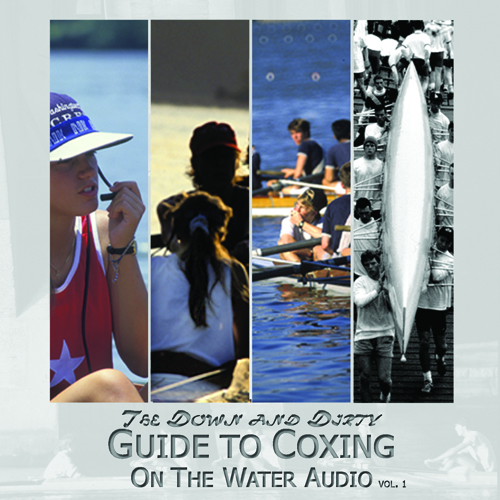 On The Water Audio

Listen and learn from the best! Coxing audio at its finest.

PLEASE NOTE: The OTWA CD is currently out of stock. We are pressing new CD’s now and hope to have them available again in June. Thank you! 5/23/2014

It’s here! The Down and Dirty Guide to Coxing’s presents your chance to ride along with some of the best coxswains in the world. On The Water Audio puts you in the coxswain seats with U.S. National Team and NCAA champion coxswains during practices and races. You get to listen to how they direct, interact, and focus their crews. So if you have often wondered just what to say during a long piece, how to motivate a crew in a high stakes race, or how to keep it all together in the coxswain seat, this is your tool for success.

The CD contains over 75 minutes of material in 10 tracks. Eight pages of liner notes provide bio’s on the coxswains, and additional thoughts on coxing and the important things you can learn from the listening to the coxswains on the disc.

Below you will find the track listing for Volume 1 of the On The Water Audio cd. Included in this list is some additional information about the track including the location and some added details. I hope to add even more information about the tracks, mainly my impressions about each coxswain’s style and content, in the near future. Do you have any thoughts? Head over to the forums and give your input!

Add to cart
Add to cart
All contents, text, images, graphics, and logo are Copyright© . No item may be used or reproduced without express written approval of owner.